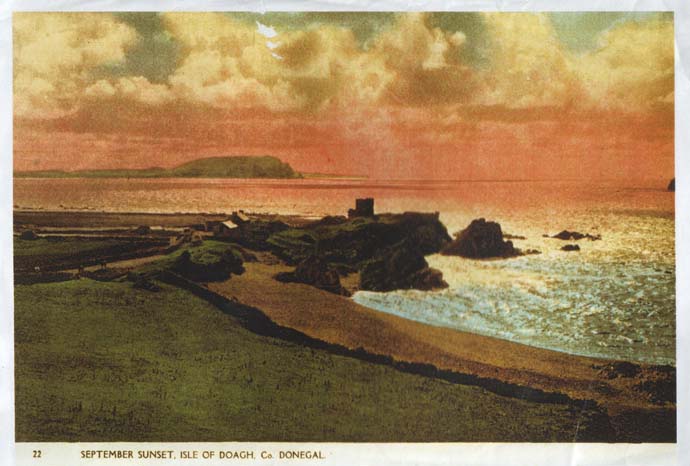 From Inishowen: its History, Traditions and Antiquities by Magtochair 1867.

We will now hasten onward, and as we pass through the village of Ballyliffin, pause to take a moment’s notice of the scenery before us. Here we stand on a considerable elevation; on our left, overhanging the main, is Binion Hill, before us,

“ The interminable ocean lies beneath,
Far away the broad-curved beach stretched on;
And I can see the quick-paced waves advance,
One after one, and spread upon the sands,
Making a slender edge of pearly foam
Just as they broke; then softly falling back,
Noiseless to me on that tall head of rock
As it had been a picture; descried
Through optic tube, leagues off.” Atherstone

Such is Pollan Bay, viewed from this point, with its curved beach of white sand, at the head of which is Carrickabraghy Castle; and amid the waters, far in the background, stretches forth the promontory of Malin Head. But the old castle and its surroundings will well repay a visit; a description has been sent me of the locality, from the fluent pen of a gentleman who ardently loves this old land, and who, I believe, derives as much enjoyment from the contemplation of its beauties as others from the possession of its broad acres. If not given in its own graphic style the narrative would suffer irreparable loss, so here it is:

“I now proceed to give you some notes of Strabregy and the Isle of Doagh, for the benefit of tourists to our northern coasts, and of those lovers of the sublime and beautiful who may not have the opportunity of visiting this, one of the most romantic but neglected localities of Ireland. I have often thought that many of the lovers of grand natural scenery in Inishowen do not know half the beauty of their native peninsula. While they strain every nerve, and the purse strings too, to gratify their taste by visiting the glens of Antrim, the wooded beauties of Wicklow, and the enchanting lakes of Killarney, they leave unexplored at their own doors, so to say, bright spots of rare beauty and historic worth, until their claims to notice are pointed out by some tourist from a distance, or perhaps some modest village scene painter. These thoughts are strengthened by the sensation I observe created by some glowing descriptions lately published in the Derry Journal of localities to which they all had easy access, but were overlooked in the desire to see more distant places of more sounding fame, but which, perhaps, repay the sightseer no better. Are there not many of our Inishowen pleasure-seekers who know more of the Dargle than they do of Glenevin, and of the Gap of Dungloe than of the Gap of Mamore, and yet I have heard a learned D.D. say he saw nothing so bold in the scenery of Wicklow as the same Gap of Mamore; but of this again, my business now is to show you Strabregy. It’s true I’ve never beheld the beauties of Rhineland, nor have I seen the olive groves of Italy, nor sailed on the winding Seine; but I have steamed up the Thames, crossed the Forth, wandered ‘where Clydie rins smoothly,’ and strolled listlessly on the bank of the Liffey, and yet I never in all my wanderings, looked upon a scene of natural grandeur than that which is presented to the traveller’s admiring gaze as he takes his stand upon the heights above Ballin-da-bo.

A hundred feet beneath him he sees the green rolling waves of the Atlantic chasing each other towards the entrance of the inlet, and, after spending their rage upon the Bar for breaking up their sport, proceed calmly into the still smooth waters of the lake. Before him, on the opposite side of the inlet, sweeping boldly round in a splendid curve, rise the Knockamenny Bens, some hundreds of feet, crowned by a richly variegated sward of heath, soft grass, and wild flowers; closely adjoining them, embossed in low sand hills , is Lag Chapel, the oldest in this part of Ireland, and immediately on the other side of the chapel Knockglass rises its lofty front in calm defence, like a vigilant sentinel keeping watch over the quiet graveyard at its feet.

A short distance away at the northern extremity of the Isle of Doagh, on a rock called Carrick Brachaí are the ruins of an old castle built by one Mc Faul. Of this relic of bygone times nothing now remains but the a square tower, about 30’ feet high, the angles of which, with geometrical precision, point to the four cardinal points, and a few broken ruins, which prove that the structure was once more extensive. The view from this spot on a fine evening is singularly beautiful. Stretched out before you, like some immense living creature, its bosom constantly heaving with the pulses of life, lies the broad surface of the Atlantic ocean. Far away as the eye can reach, like a dim cloud resting on the waters, is the Island of Tory; nearer abruptly rises Glashedy, with its emerald carpet of rich soft grass; further distant the bold cliffs of Binion frown up in brown stern majesty, between which and the green heights of Cruck Aughrim the dark sharp form of Bulabin looms up in the background, the whole forming an outline at once singularly bold and attractive.

At the eastern extremity of the miniature bay of Ballindabo stand two rocks, well worthy of the attention of the antiquarian and naturalist. They are about 40 feet high, and on the top of one of them, which is insulated by every tide, are the remains of a castle, built by Phelemy Breslaugh O’ Doherty, for the purpose of preserving his infant son from the ravages of the smallpox, which at the time was desolating the locality; but for all his paternal care the child caught the epidemic and died. Although his measures had not the desired effect, Phelemy was surely right in having recourse to sanitary means in order to stem the plague. Through the centre of the other, from side to side, runs a fissure, about 40 feet in length, opening on the side next the water into a splendid lofty hall: capable of containing upwards of 100 persons; the sides are smooth and polished as the most elegant furniture, and wrought into an endless variety of shapes from the action of the tide. The formation of this rock, the sandhills in the vicinity, and other circumstances, prove that the locality was at one time the scene of some grand natural convulsion or earthquake.” 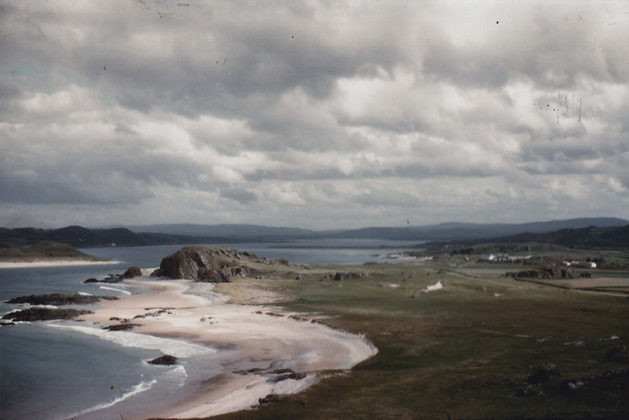